With the MarkenTurm (the Brand Tower – see image below) of the Volksbanken Raiffeisenbanken, the EREIGNISHAUS agency for live marketing staged a unique, interactive brand exhibition at Montabaur Castle, on behalf of the Bundesverband der Deutschen Volksbanken und Raiffeisenbanken e. V. (BVR), at the Academy of German Cooperatives (ADG).

Among the financial service providers in Germany, the cooperative Volksbanken Raiffeisenbanken with 18.5 million members plays a very special role. To experience the power of this brand, especially for its own employees as a unique selling point, EREIGNISHAUS worked closely with the BVR to develop a cross-media, haptic and digital overall concept in a walk-in exhibition. The multisensory exhibition unites the brand world, the learning laboratory and the meeting place.

In addition, the high relevance of strong brand management is the focus of the exhibition. To this end, the MarkenTurm has created a fascinating visitor journey from the roots of the cooperative movement to the brand history (basement: past) to the significance of the cooperative idea in the present (floor 1) and for the future (floor 2). 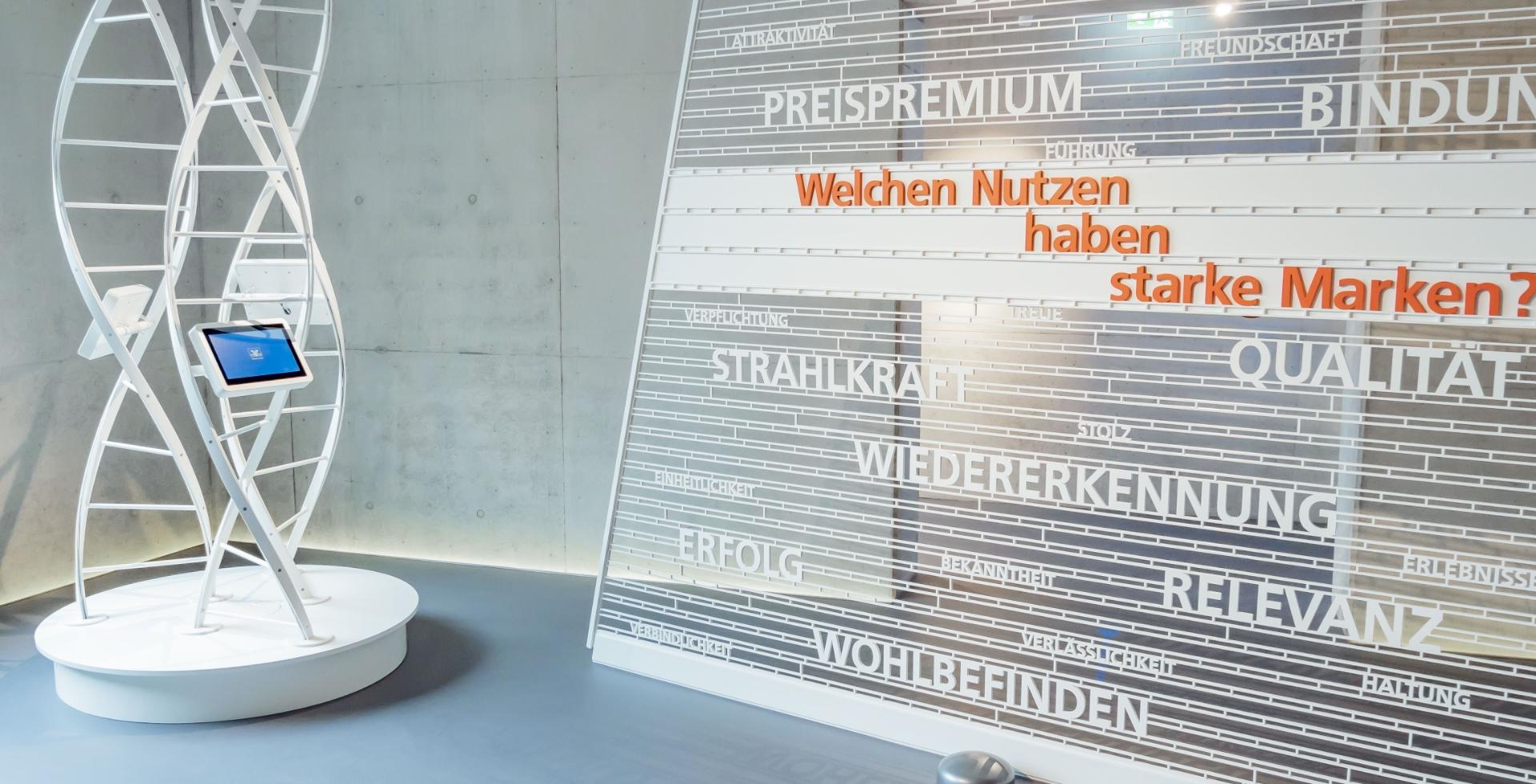 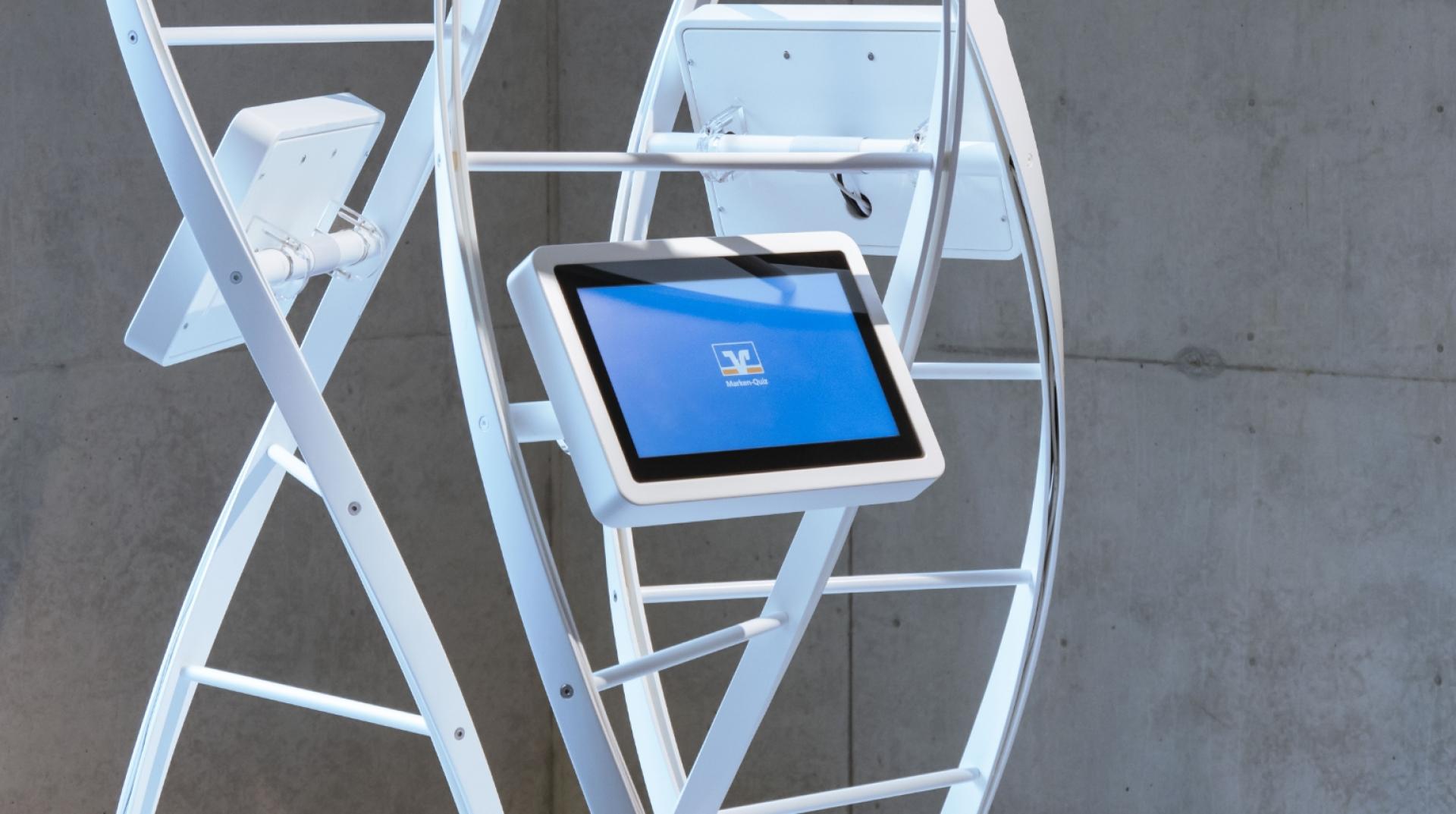 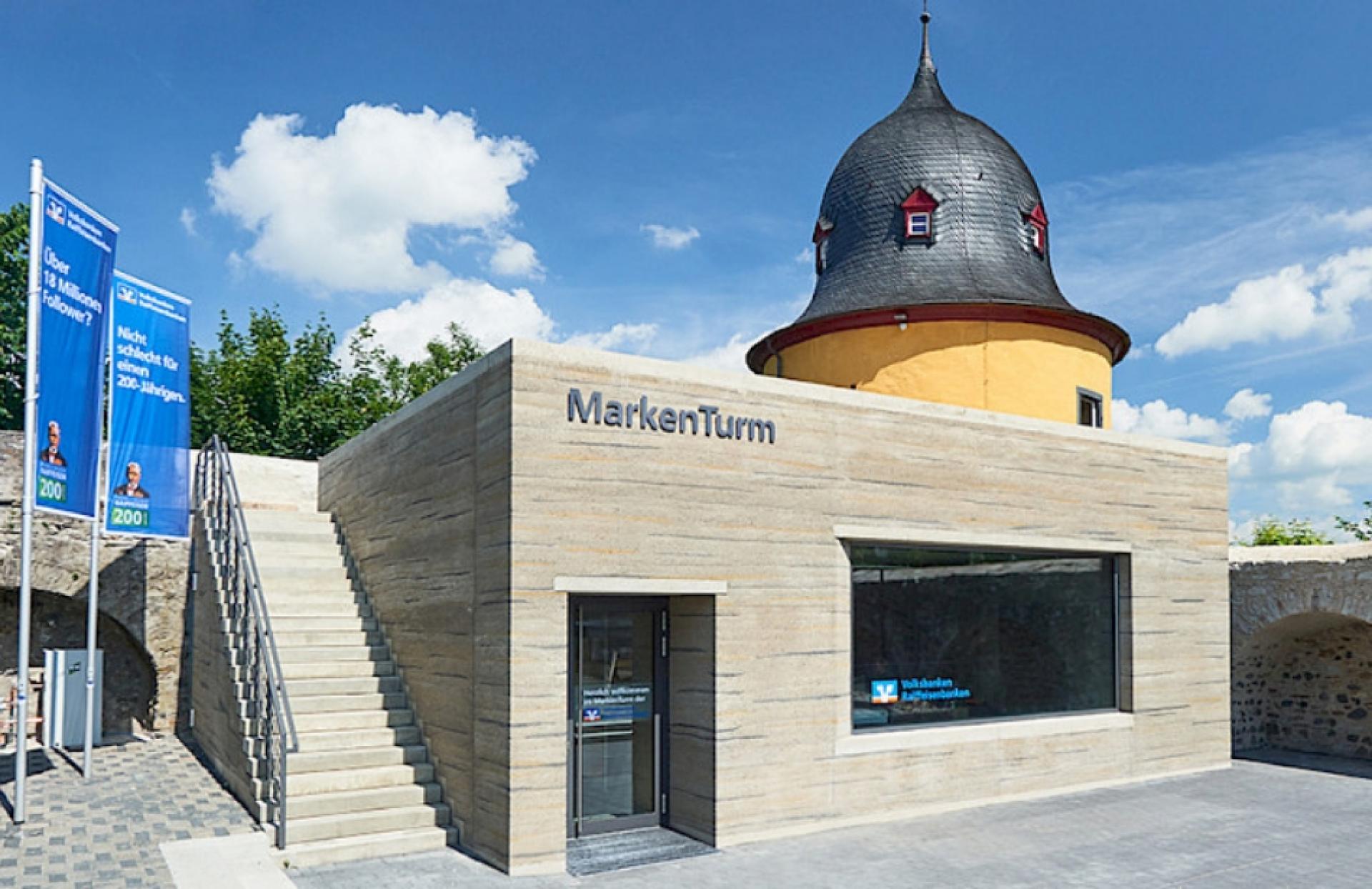 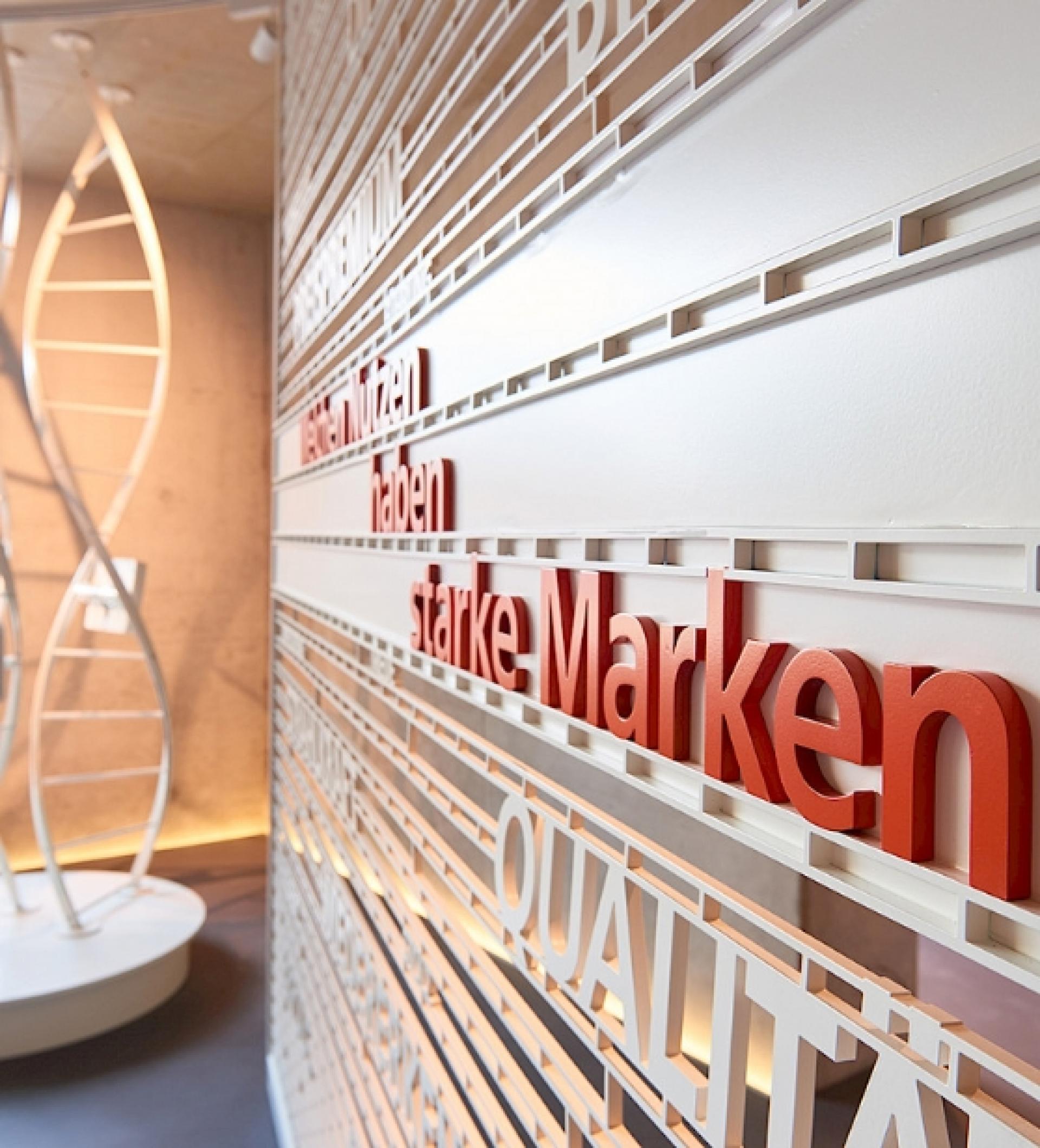 Realtime Visions selected the appropriate hardware, programmed the interactive applications and was responsible for the commissioning of the media technology and software systems.

As soon as the door to the MarkenTurm is opened with a key card, a large-format monitor greets visitors and provides information about the exhibition.

At the "Aircraft" station, picking up headphones activates an audio track. When requested, the visitor chooses one of the identical aircraft, then pushes a button to select an aircraft. The engines are activated and the aircraft turns 180°, so that the view of the respective brand logos is released. Now the difference between both airlines is clarified by the audio track.

At the "Smartphone" exhibit the interaction of the visitors clears the view to smartphones hidden behind special glass.

A sensor-controlled holographic projection in the basement brings the two founding fathers of Volksbanken Raiffeisenbanken to life.

There is a photo booth on the ground floor. Visitors can take photos and select a background. The visitor can have the picture sent to them by e-mail, or integrate the picture into the animation of pictures of previous visitors, which runs on a large screen.

In addition, many other smart multi-touch applications, professional sound systems and intelligent sensors are in constant use.

All systems are fully automated and operate daily. 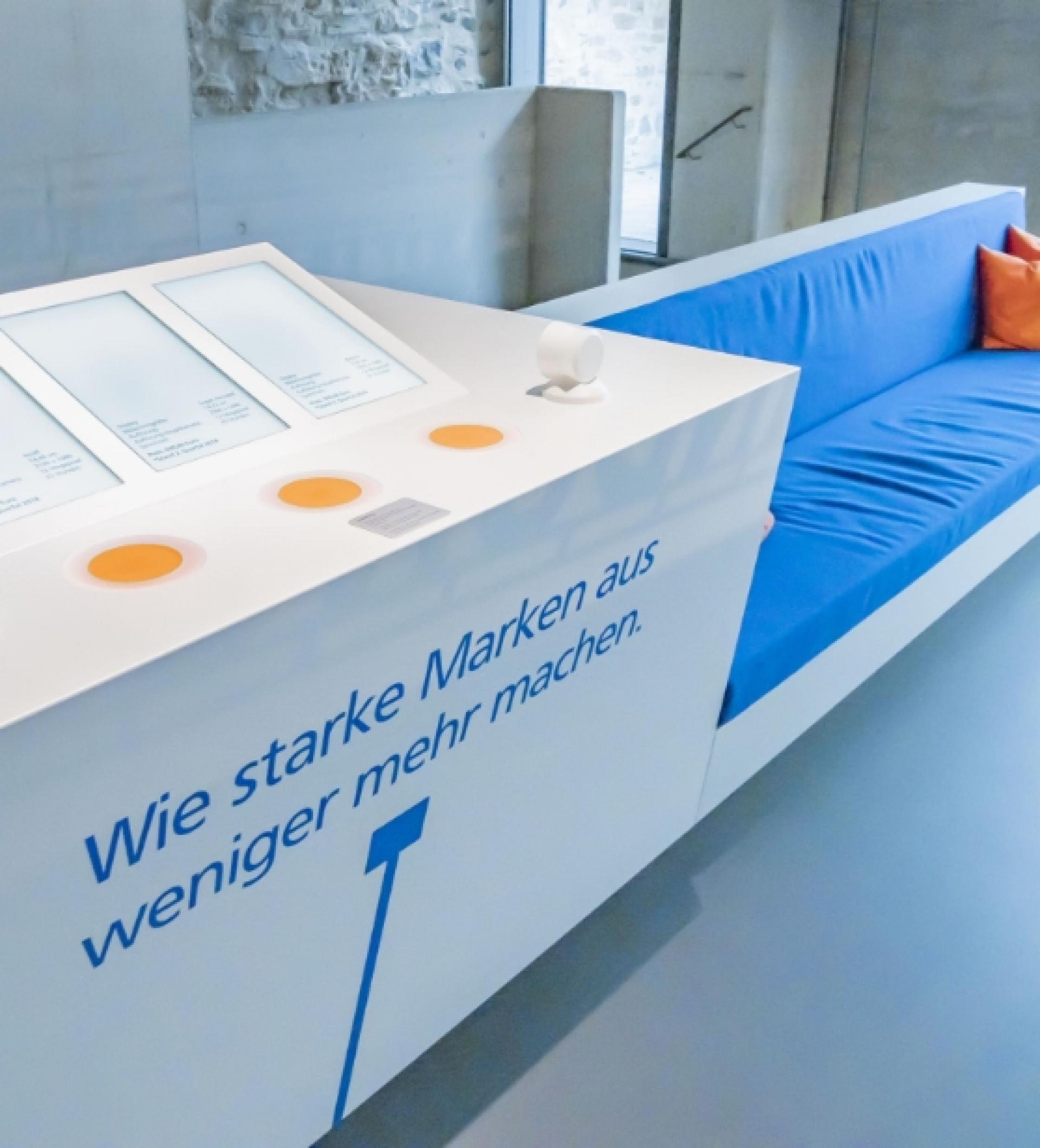 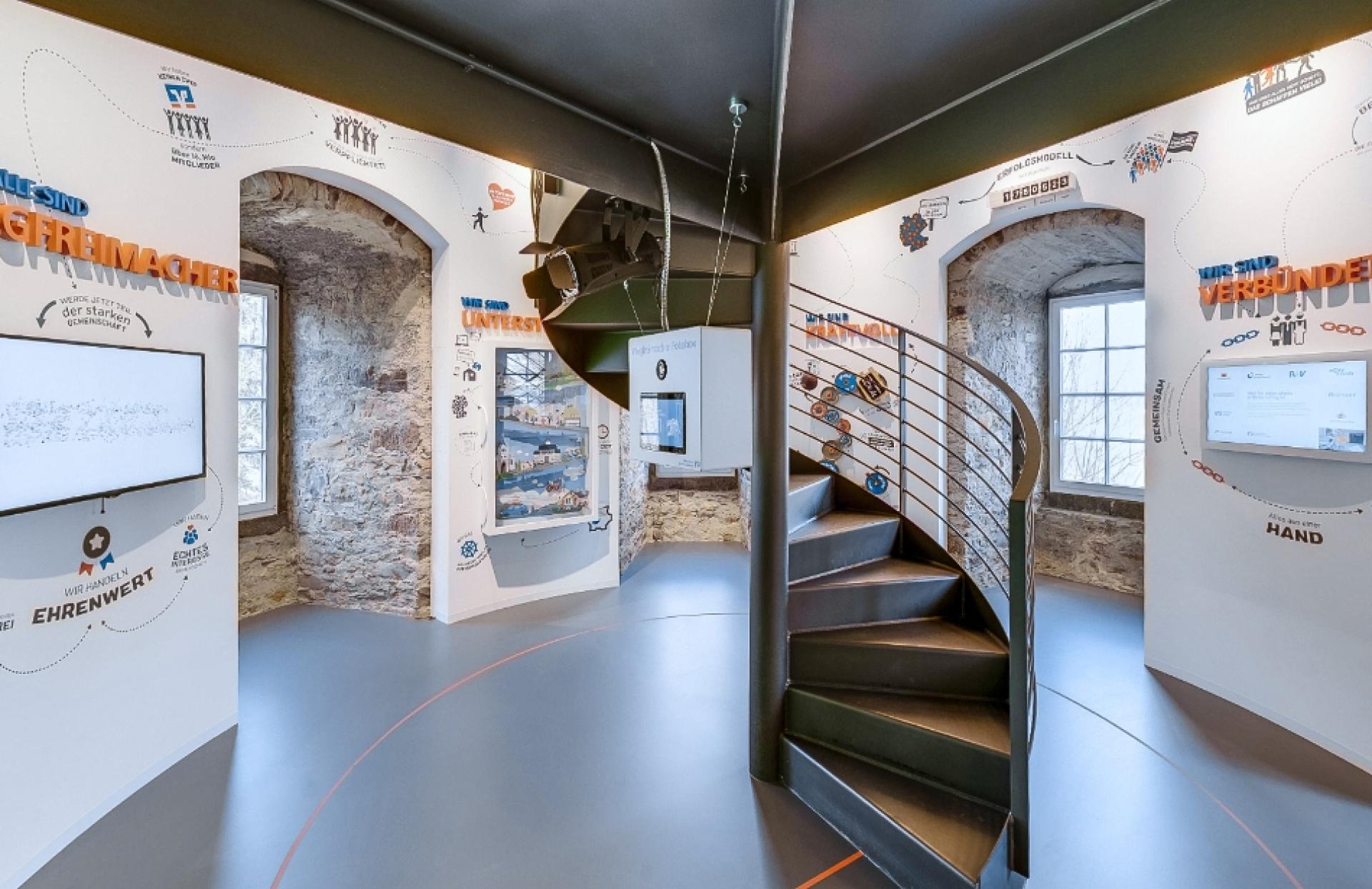 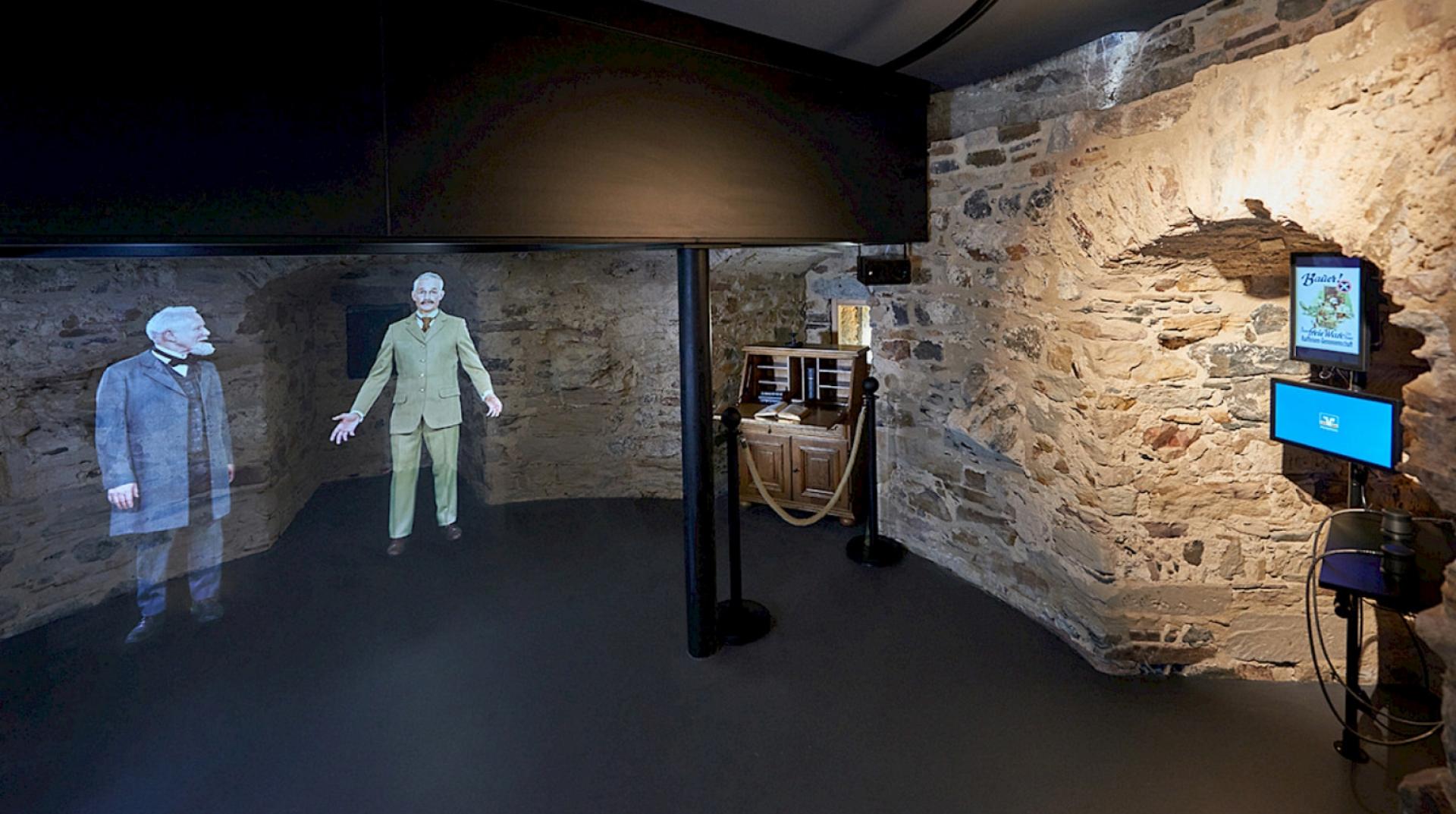 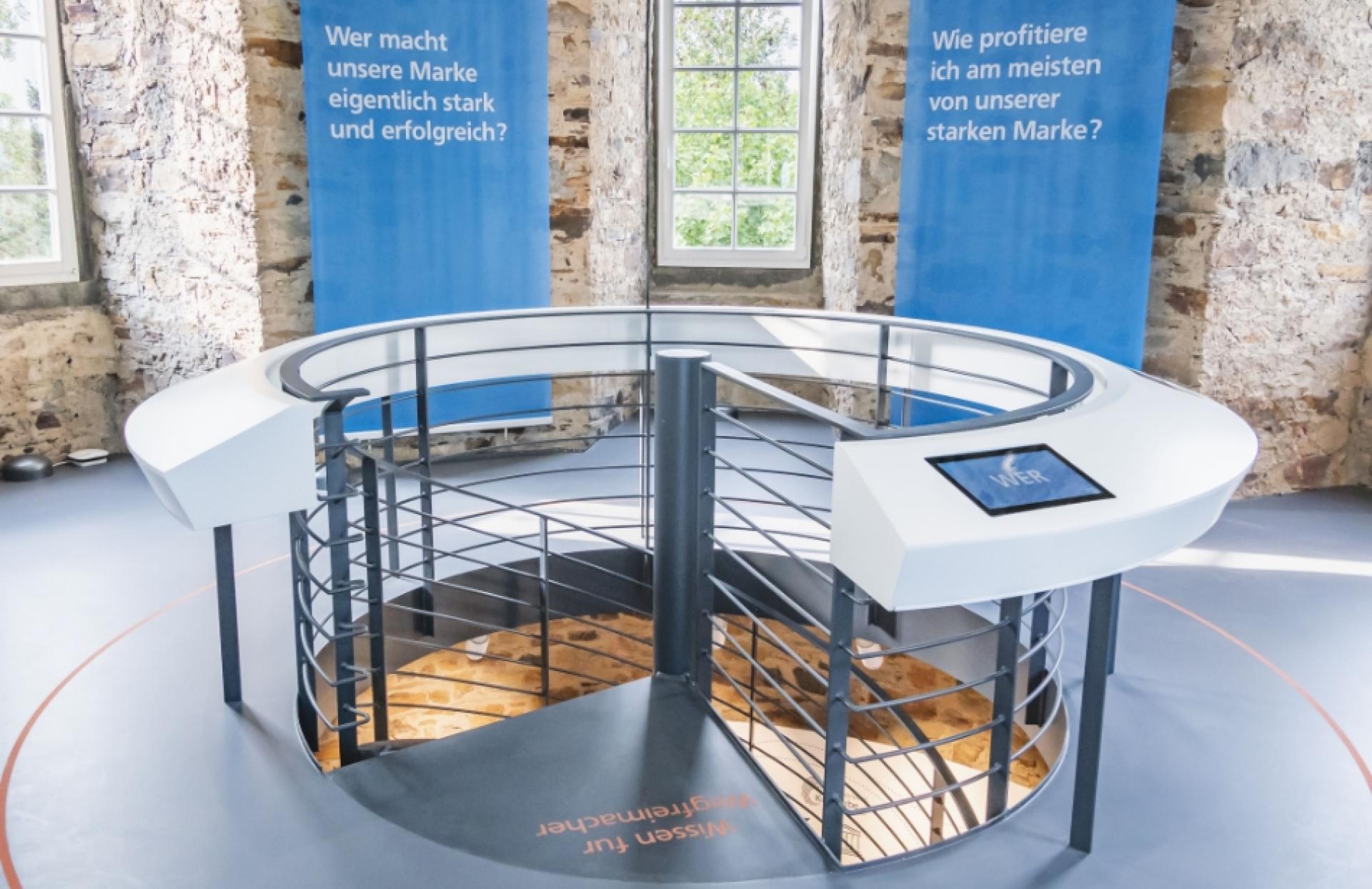 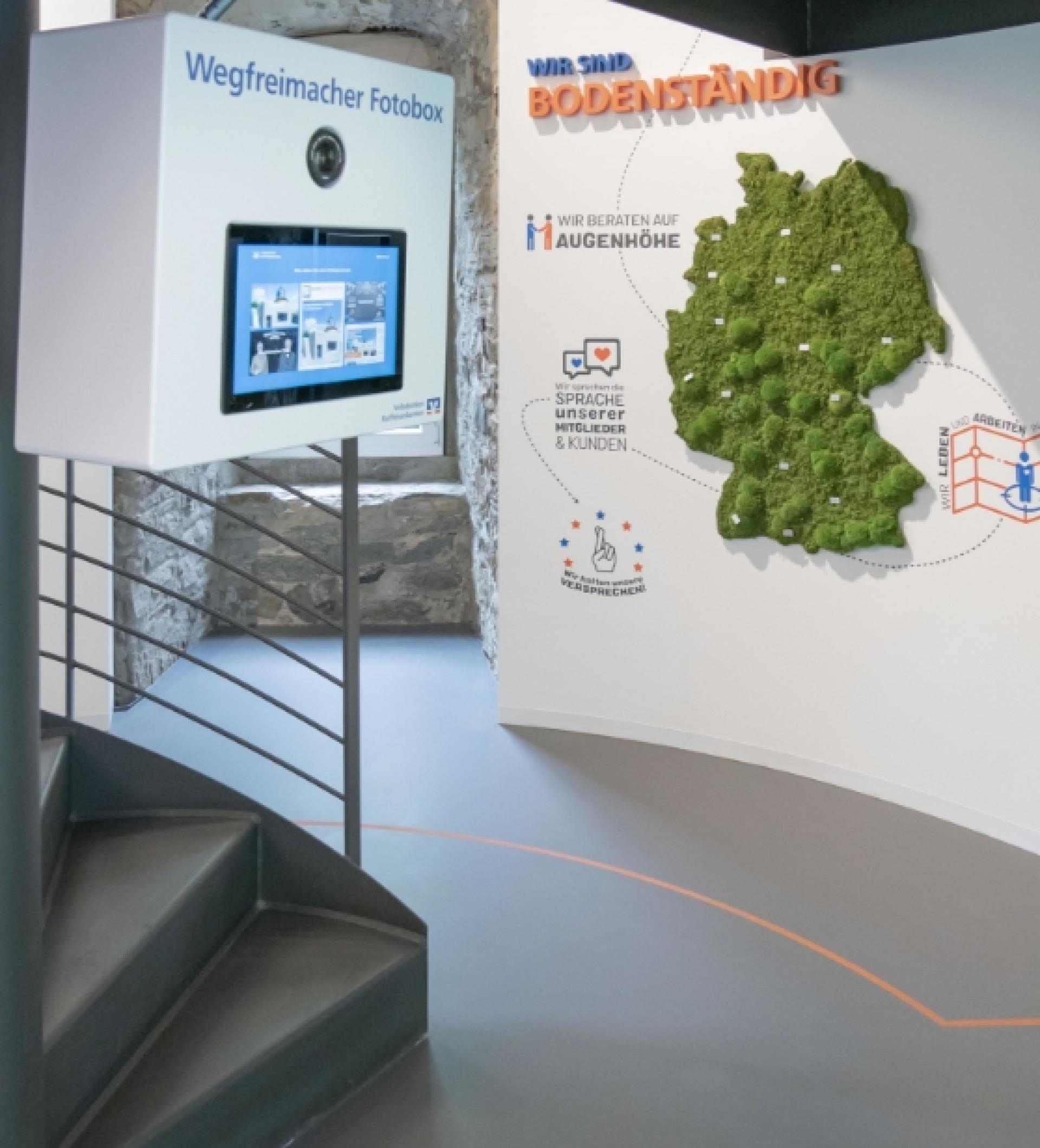 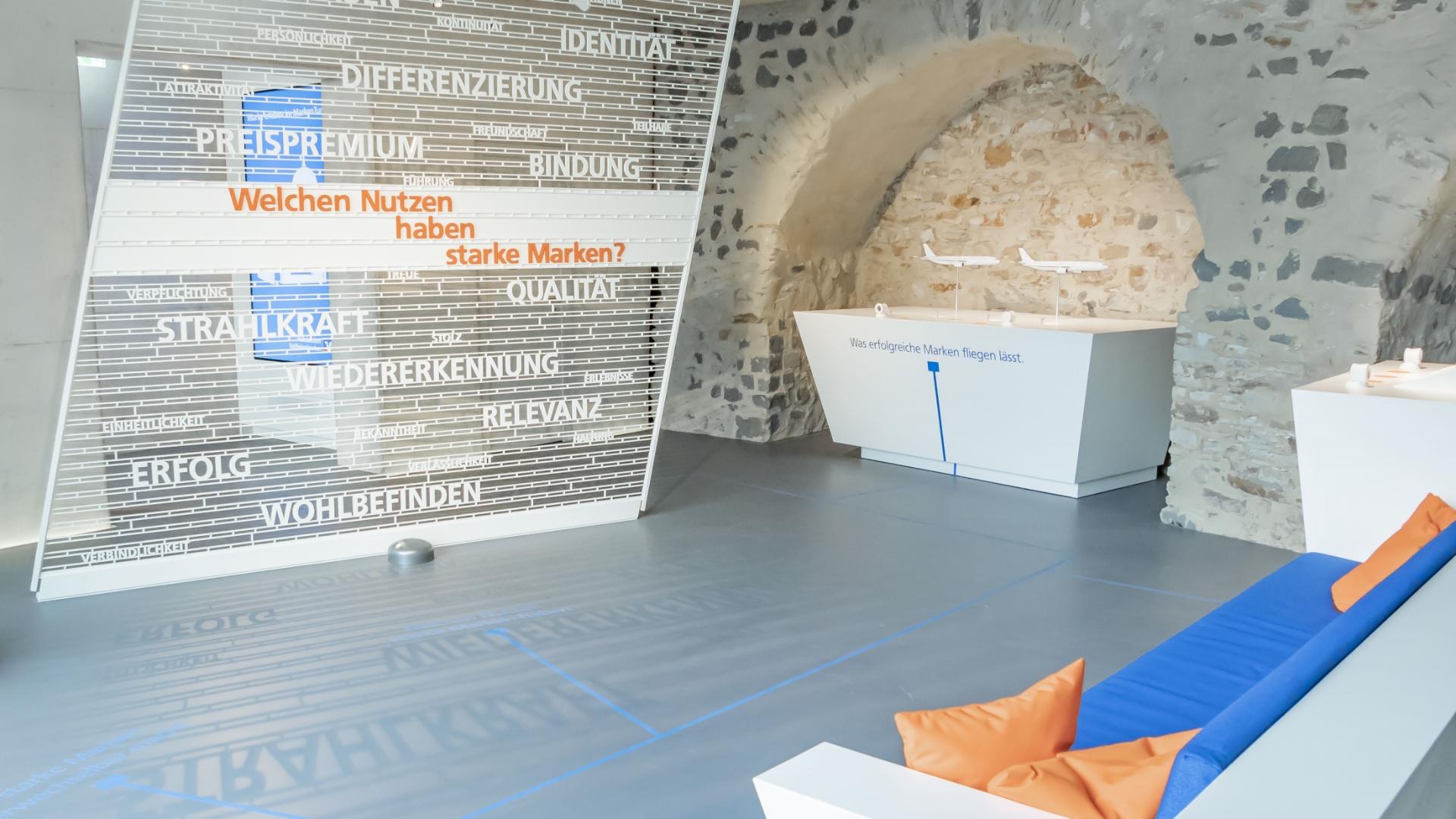